Experience a captivating journey through a series of displays, each depicting a different aspect of Britain’s varied and extensive motoring history.

Walk along the Time Road, a century of motoring history beginning in 1896 and experience how motoring has changed: the roads, the cars and even the fashions. Discover when Cat’s Eyes were first introduced, when the first driving test was taken and where the first motorway was built. Watch out for our costumed explainer, Lady Edwards, who will help you imagine motoring in the early days of the car. 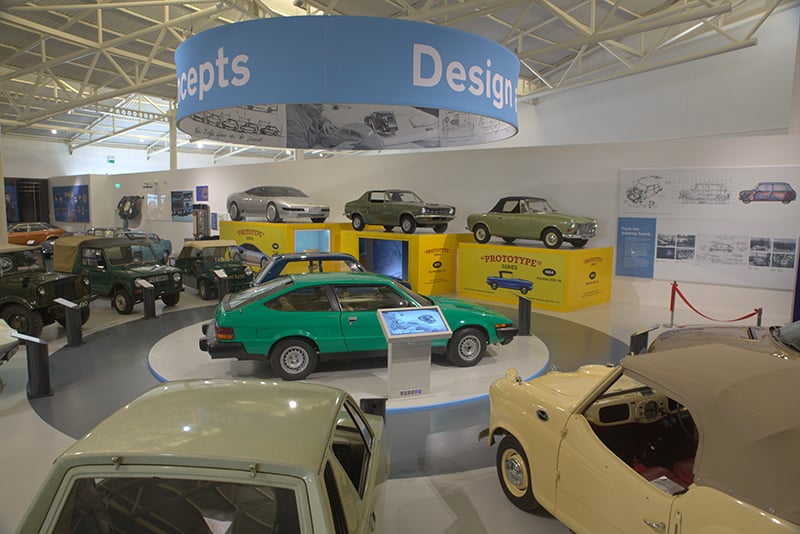 In this area you will see a unique array of prototype vehicles such as the Triumph Lynx and the MG EX-E concept car, which never quite made it into production. The touch screen panel allows visitors to investigate in more depth the design process, the designers themselves and other ‘what might have been’ cars. 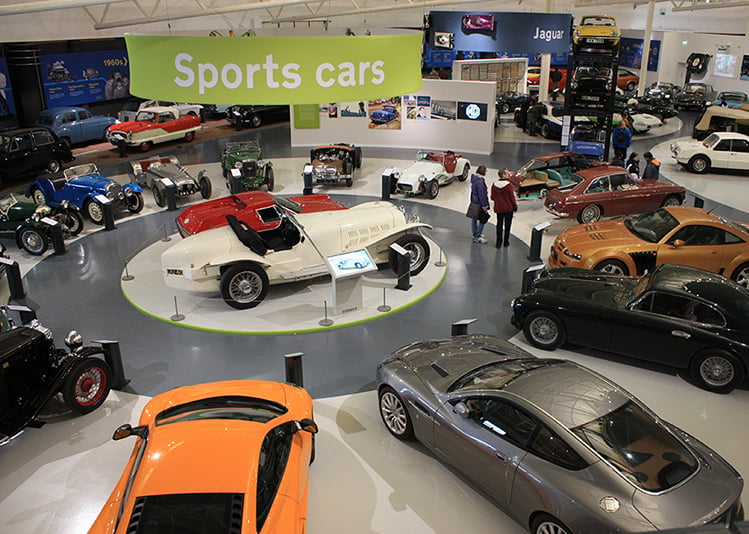 This section celebrates the much loved British sports car from manufacturers such as Morgan, Lotus, Triumph, McLaren and Aston Martin. Visitors can stand inside our sectioned 1965 MGB GT – divided into two halves for display at the British Motor Show in 1965. The touch screen panel allows visitors to look in more detail at the manufacturers, advertising and famous faces such as Colin Chapman and Donald Healey. 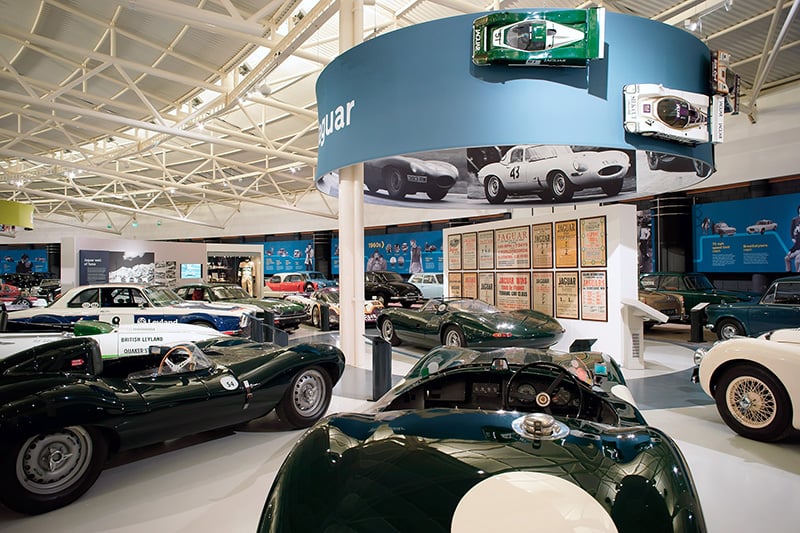 The Jaguar zone features an exciting selection of vehicles representing some of Jaguar’s finest sports and racing cars. The vehicles are owned by the Jaguar Heritage Trust and are a small sample from its collection of some 150 historic vehicles.

The vehicles regularly on display in the Museum include a 1950 Jaguar XK120 to the 1988 Le Mans winning Jaguar XJR-9. Other models include a 1953 Jaguar C-type, the only surviving D-type prototype from 1954 and the XJ13 - the only one of its kind in existence.

The touch screen panel allows visitors to investigate in more depth the history of Jaguar through the decades, its involvement in motorsport and the people who helped make it the international brand that it is today. 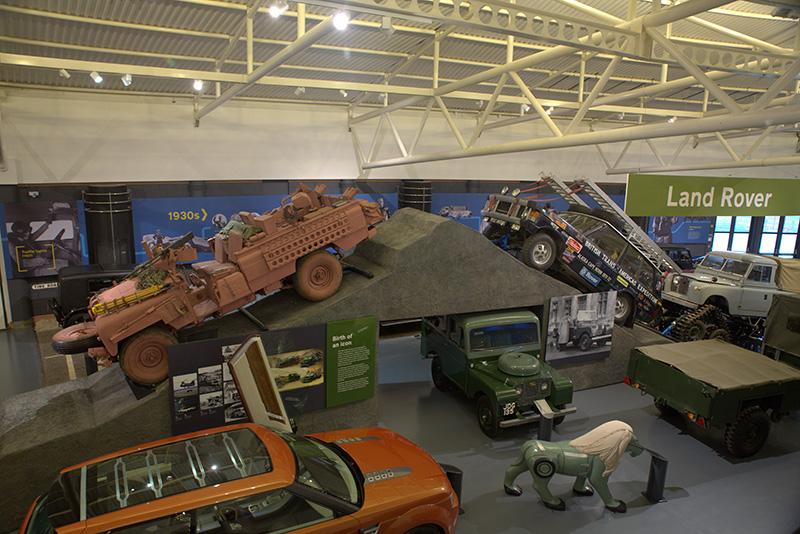 The Land Rover display is dominated by a man-made ‘mountain’ designed to show off the Land Rover’s off road capabilities. Cars on display include a 1968 series IIa SAS ‘Pink Panther’, an amazing tracked Land Rover ‘Cuthbertson’, the Range Stormer concept car and the very first Range Rover off the production line.

The display features authentic film footage and images from our archive. The touch screen panel allows visitors to follow the journey of Land Rover from functional vehicle to style icon and to discover some of the adventures Land Rovers have been on.

Using many images from the Trust’s extensive collections and archive, Making British Cars tells the tale of the changing times and fortunes of the motor industry in Britain. It describes the progress of technology, growth and mergers, and the highs and sometimes lows of some of Britain’s most well-known companies. See how the industry has altered over a century and Britain has been a leader in car production, design and innovation.

Yet it is not just a story of factories and machines. It is very personal history, featuring the many thousands of people who have worked in the industry. Brought to life by archive images and moving film, Making British Cars charts the ever changing scenes of working life, fashion, wellbeing and social times for those that have been and still are involved in building cars in Britain. 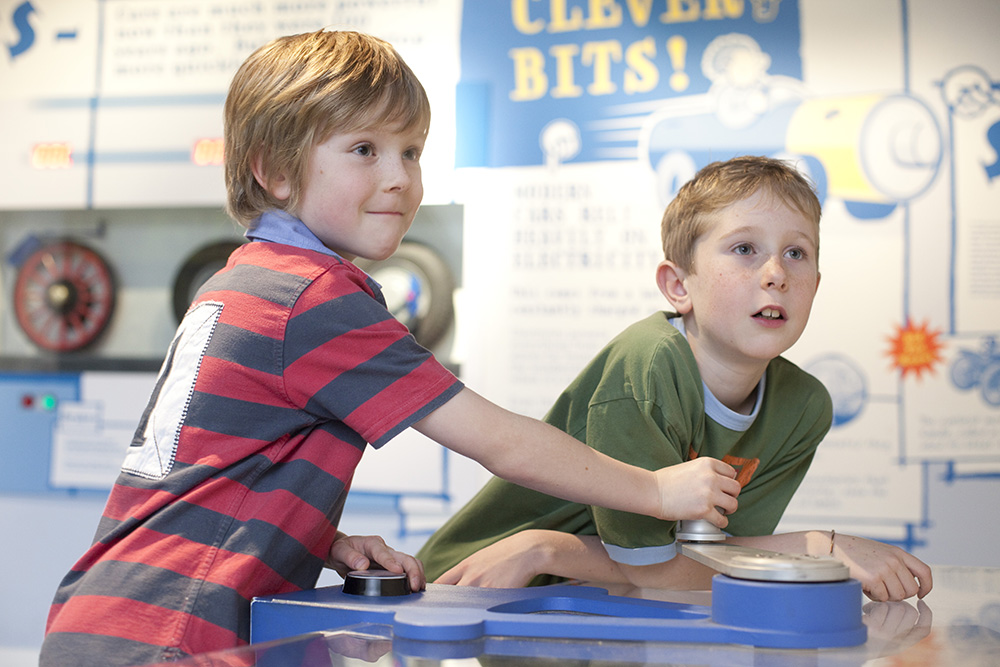 Do you know what goes on underneath the bonnet of your car, what happens when you change gear or how your car protects you if you are unlucky enough to have an accident? Well now is your chance to find out!

Get hands on in our interactive ‘Under the Skin’ zone, suitable for all ages with lots of levers to pull and buttons to press, including steering simulators and a car that you can climb in to play. You might be surprised what you take for granted every time you turn the key in the ignition.

Film & TV Cars
The Film & TV cars zone includes our most popular movie vehicles – the fabulously pink FAB 1 from Thunderbirds, the Land Rover Defender used in the opening sequence of the James Bond Skyfall movie, the Tomb Raider Defender, the Land Rover ‘Judge Dredd’ City Cab and a replica of the DeLorean from Back to the Future 2.

Gas Turbine
This section tells the story of Rover and the gas turbine. With three Rover gas turbine cars on display, including the unique Rover BRM which completed Le Mans twice, you can discover the reasons behind Rover’s fascination with the jet engine.

Record Breakers
Our Record Breakers display features four of the world’s fastest MGs - along with some fabulous images and film of them in action.

Royal Cars
We are lucky enough to have a number of vehicles used by members of the royal family. Those currently on display in the Museum include the first bespoke royal Land Rover state review car - one of the fleet of vehicles used for HM Queen Elizabeth II’s first Commonwealth Tour - and a 1971 Rover P5B, personal property of HM the Queen but on long term loan to the Museum.

John Carter’s Garage
The garage contains many original fixtures, fittings and objects and is styled to be representative of a 1930s independent garage. This is the place to meet our costumed explainer, John Carter, who will talk you through what it was like to work as a mechanic back in the 1930s.

Motoring Cinema
In the 1930s themed Motoring Cinema you can watch footage from some of our archive films. These run continuously through the day beginning at 11am.

William Morris
Step into the office of car magnate William Morris, Lord Nuffield, from the Morris factory at Cowley, laid out just how it was when he last came to work in 1963. The Museum has preserved all the original contents and has reconstructed the office exactly as it was on the last day Morris visited.

Get the most out of your visit to the British Motor Museum, find out opening times and prices as well as family activities and exhibitions.

The Collections at the British Motor Museum include over 300 British cars and over 1m historical items tracing the history of the British motor industry.

Discover a massive and diverse range of enthusiast shows and family events at the British Motor Museum.