Not everybody gets a first car at 17. In this edition, Jean falls in love with her first car, aged 83!

This month’s theme is ‘Not just at 17!’ and it seeks to highlight that it’s never too late to find a love for cars later on in life. This story will cover that of a Fiat 500.

Although Italian and not British, the Fiat 500 is an iconic car. Its original name was the Cinquecento, which translates to ‘five hundred’ in Italian, and between 1957 and 1975, 4 million of these little cars were produced. Although discontinued in 1975, the 500 was brought back in 2007 with a modern twist. With each new model came variations on the name but it always retained the ‘500’. 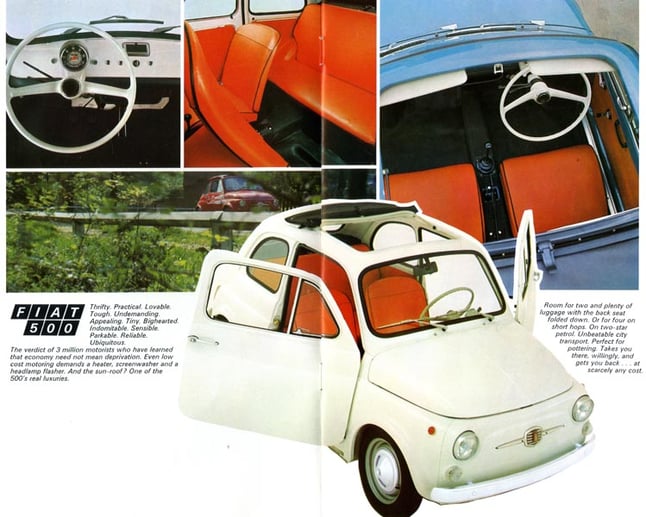 June passed her driving test, on the first attempt in 1962 at the age of 28. She described herself as an ‘occasional’ driver as her husband, Brian, always drove if they went anywhere - particularly if it was a long journey. Neither June nor Brian were car enthusiasts; both saw the car as a practical tool in family life. Thus, Brian always chose practical mid-sized family hatchbacks such as the Austin Maxi, Allegro estate and Metros. Before these steady, British cars however, Brian was tempted to make a brave (some might say ‘reckless’) choice and bought the rather unremarkable Moskvich estate.

Sadly, many years later Brian had to give up driving due to illness. Unfortunately, this also coincided with their faithful, ageing Vauxhall Astra running out of reliable miles. As June was in her early 80s, her family thought she may give up driving altogether. So imagine their surprise when June called her son-in-law one evening for some car advice!

She said, “Jim, I’ve seen a car that I rather like the look of. I spotted it when I went to get my hair done but I was running late and didn’t get its model name. So, the following week, I went to my appointment a little earlier and it was there again. This time I had a notebook and pen and I wrote down these details, I hope they mean something to you. This is what I copied down: F. I .A. T. 5. 0. 0.”

“Well, I really like the look of them.” June continued. “They’re very pretty and I quite fancy being trendy and it looks easy to park. I think I will treat myself to a white one and I would like a pretty red interior...”

At first, her son-in-law chuckled but soon realised she was very serious. So, the challenge began, finding a nearly new, well looked after model -not forgetting it was to be white with pretty red interior.

Two weeks later, June, at the tender age of 83, popped to the shops and the hairdressers in her new, beloved Fiat 500. She loves how spacious and easy to park it is and how it really zips along. June remarks, “When I see it parked up on the drive or at the supermarket it really makes me smile,” thus proving that it’s never too late to become a petrol head. 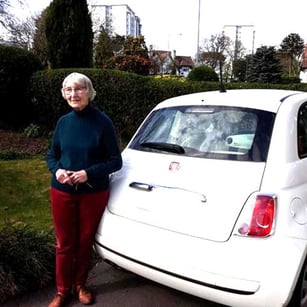 June will be 86 this summer and is pictured here with her treasured Fiat 500.

If you enjoyed this 'My First Car' story then why not share the story of your car too? We’d love to hear it! Your story should be no longer than 500 words and we’d love to see some pictures of your first car too! Email it to community@britishmotormuseum.co.uk with the subject ‘My First Car’. We may not be able to publish everyone's stories but we will certainly enjoy reading them all!