Factor us in project update: the early years

In the past month I've been working on identifying and digitising items in the British Motor Museum's archive relating to three specific car factories: Canley in Coventry, Longbridge in Birmingham and Lode Lane in Solihull. We are going to focus on these three for the project but we will also be looking at the many other factories around the West Midlands.

Over the years these have been owned by different car companies and produced different car marques. Canley was best known as the Standard-Triumph factory. Longbridge started out as an Austin factory but later produced a wide variety of Rovers. The Solihull plant, commonly known as Lode Lane, started as a shadow factory during the Second World War run by the Rover Company, which had started in Coventry, and became the main works after 1945. In fact, all of these factories produced armaments and/or made parts for planes during the war.

Here is a selection of items from the archives relating to the early years of car manufacture up until the Second World War.

This menu is for a luncheon to celebrate the first car to be produced at Longbridge in 1906, the factory having been set up the year before. This image on the front of the menu shows a view of the factory as it was, surrounded by fields...

By the 1960s housing estates had been built around the factory, as can be seen in later views... 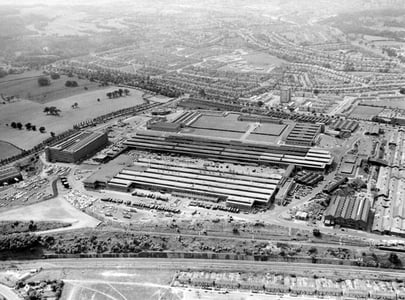 A surprise find from the Rover files was this aerial reconnaissance photograph taken by the Luftwaffe in 1940 of one of the factories in Birmingham, the Birmingham Small Arms factory at Small Heath, not a Rover factory as recorded on the photograph. While originally making armaments BSA had diversified into making motorbikes and cars, but in 1939 Small Heath was the only factory in the UK making rifles. The factory was bombed by the Luftwaffe on 26th August 1940 and again in November of that year, killing 53 people. This reminds us of what danger the West Midlands was in during the Blitz purely because of the car factories that had adapted to manufacturing military equipment. 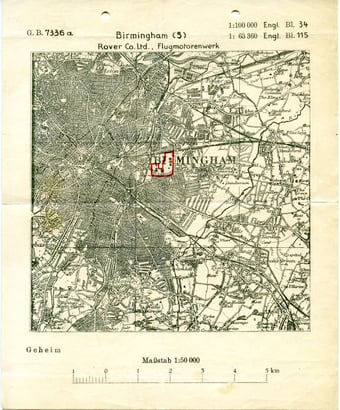 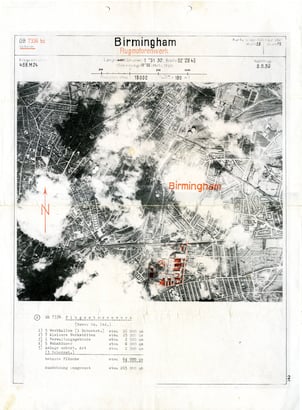 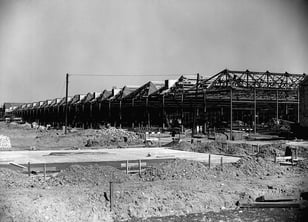 The increased factory space after the war led to a boom in car production until the 1960s. 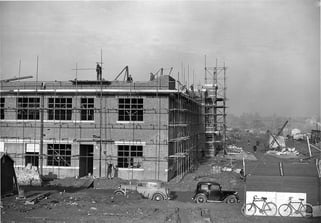 Lode Lane is still in use as a car factory by Jaguar Land Rover, and you can visit for a tour of the factory. Having been set up on land belonging to Foredrove Farm in 1941, after the war ended it was renamed the Meteor Works and manufacture was moved here from the original Meteor Works in Coventry, which had been damaged in the Blitz. Knowing that it was going to be difficult for staff to get to Solihull and that it may take some time to either move house to be nearer to the new works or to get another job in Coventry, Rover laid on temporary free buses for staff to get them to Solihull. Here are two notices that went up to staff to explain the arrangements...