Factor us in: Longbridge Factory

We have decided that it's unlikely that we can get out into the community over the next few months to talk to you, but we would still like to get in touch virtually. Did you live near or work near a former factory? Do you live near or work in a current car factory? Perhaps some of the items from our archive in this blog post will spark a memory you want to tell us about, or you may have an opinion about whether or not the item accurately reflects the area. Do email me on kim.biddulph@britishmotormuseum.co.uk with your thoughts. I will also be running a virtual chat in the New Year. Look out for more details on this blog and on our social media channels.

Longbridge has a long history, which even pre-dates the Austin factory that was installed in 1905. The plant was built ten years before for a tin printing company that went bust and was empty for four years before Herbert Austin bought it and set up the Austin Motor Company. Eventually the factory closed in 2005, and has been redeveloped as a business park. Below are some of the highlights of the factory and surrounding area found in the British Motor Industry Heritage Trust archive here at the British Motor Museum.

Longbridge was originally built in the midst of countryside near the villages of Longbridge, Rubery and Lickey. More housing was needed at the Austin Motor Co built Austin Village in 1917 from wooden kits imported from Michigan. The layout of the estate is still there, around Central Avenue, and some of the wooden buildings are still standing.

Did you or anyone you know live in the Austin Village? Do you live there now? What was/is it like to live there?

Young men were often taken on as apprentices, both from the local area and from further afield. The Austin apprenticeship was a classic scheme with lots of different assignments in different engineering departments. These included engineering and manufacturing areas and also commercial areas such as Sales and Marketing. They had their own events and social club, shown here in 1950.

Were you an apprentice at Longbridge? What was it like?

Women at the factory

While most of the workforce was male, there were a range of jobs for women, too, and we've found out a lot about them in the archives. This woman is inputting data into computers in 1971.

We don't know whether this was staged or whether the worker really needed his hand bandaging, but the photo was taken to promote the new medical facility built in Longbridge in 1996. There had been a medical centre staffed by nurses in the factory since before the Second World War. 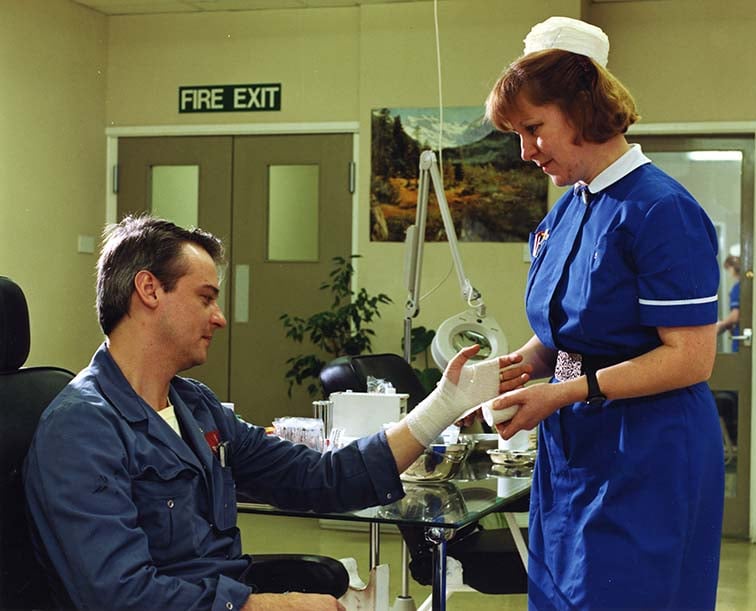 Women had been working in the factory for a while, as well. Here's two women cleaning a Lancaster bomber petrol tank in the 1940s.

Are you a woman who worked at Longbridge or do you know any women who did? What was it like? What kind of jobs did you/they do?

Of course, Longbridge was the home of “Red Robbo” the name Derek Robinson was given by the press. Robinson joined Austin as an apprentice in the 1940s and ended up as the union convenor for the plant in the 1970s, leading many walk-outs in protest at changes British Leyland were making. Eventually he was sacked in 1979 for criticising British Leyland management and the union members voted overwhelmingly not to go on strike in response. The chairman of the company, Michael Edwardes, took the company in a new direction by signing an agreement with Honda.

Did you take part in or do you remember the strikes? What did you think about them? What was their impact?

'Classic' Mini production came to an end after BMW sold Rover Group to the Phoenix Four and the company was renamed MG Rover. Lulu drove the final car, which was a Mini Cooper, off the end of the production line in the Car Assembly Building (CAB1) cheered on by the workforce and accompanied by the song 'Self-preservation society' from the iconic Mini film 'The Italian Job'. 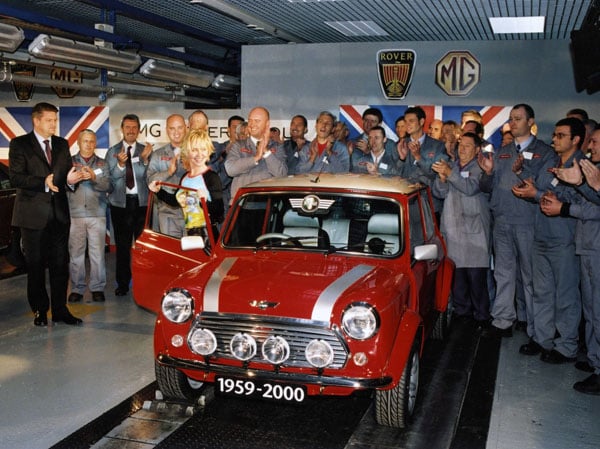 When MG Rover went under in 2005, it caused a huge impact on local people, with around 6000 losing their jobs. The factory site has largely been redeveloped, but is the impact of closure still being felt?