The Archive contains a wealth of information regarding the design of vehicles, from the nitty-gritty of their engineering to the more aesthetic art of creating their shapes. To the customer, while the merits or otherwise of the engineering would affect their opinion of a car after their purchase, its appearance was likely to be its most important first selling point. A well-styled car would attract attention, one that was considered dull or even just unusual might put people off.

A coachbuilder's drawing from 1903 for a 25 horsepower Maudslay open tourer. Interestingly, the draftsman has mis-spelt the company name.

The earliest examples of styling from our Archive Collections date back to the early 1900s, and include a set of coachbuilding drawings from the Maudslay Company. Like many companies of this era, Maudslay produced a wide variety of vehicles, from buses and charabancs, to lorries and motor cars. Early motor cars were a luxury item affordable only by the wealthiest people. This meant practically every vehicle constructed had custom-built coachwork in forms which were carried over from the horse-drawn carriages they replaced. Their names were adopted from the same tradition, such as phaeton, landaulette or shooting brake. 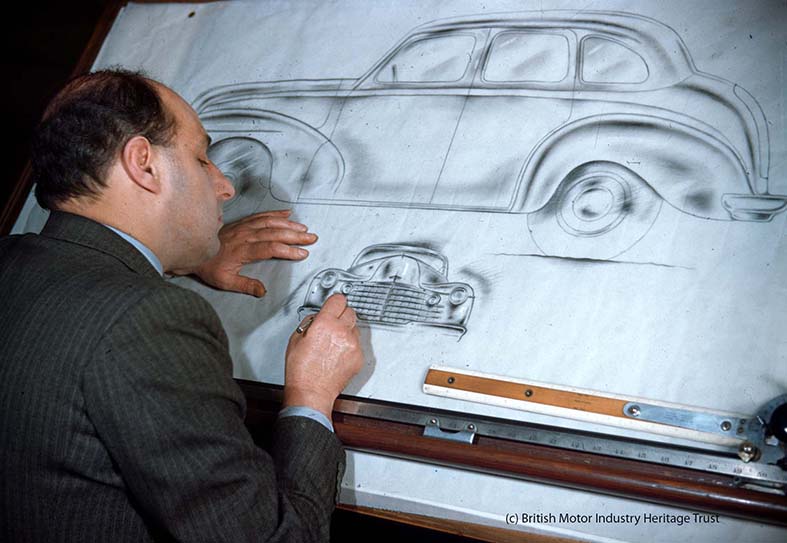 Austin stylist Dick Burzi at his drawing board in 1947, working on a drawing for the Austin A40 Devon, part of the new postwar model range.

Moving into the 1950s, design drawings were becoming more sophisticated. Dick Burzi was the Chief Stylist for the Austin Motor Company and then the British Motor Corporation (BMC) between 1929 and 1968. Of Italian descent, he was interned during World War Two when Italy became an ally of Nazi Germany. Once the war was over, he returned to the company to create its postwar model range, including the Austin A30/35, Austin A40, Austin A70, and Austin A90. These were known as the 'Counties' cars because they were given names like Hampshire, Devon, Cambridge and Westminster. Sketching was done on a large drawing board using pencils and traditional measuring implements such as slide rules. These drawings were then translated into wood and clay scale models before being converted into running prototypes for testing.

On the left, a drawing prepared by Pressed Steel in 1958 showing body pressings for the Morris version of 'ADO 15' - the Longbridge Drawing Office designation for the car which would become known as the Mini. On the right, a rendering showing the duotone colour scheme for the Pininfarina-styled Austin 1100.

Burzi would also work alongside Alec Issigonis who joined BMC in 1955 to create a new range of 'advanced engineering cars, though their styling is not attributed to him. The most famous of the Issigonis model range was the Mini, launched in 1959, an example of a car which looked radically different from anything else on the market at the time. With minimal styling, the exterior look of the Mini was dictated by the transverse engine and interior packaging. Despite its later popularity, this did not work in its favour during its first couple of years. Initially, customers were put off both by its unusual look and its advanced engineering, as they thought it would be difficult to maintain. It wasn’t till the car was adopted by royalty and other celebrities, and its outstanding motor sport success, that the tide turned to make Mini the phenomenon it later became. It was the second car in the Issigonis model range – the Austin/Morris 1100 – which would become the sales success of the 1960s. Launched in 1962, this family car was styed by the Italian design house Pininfarina, and proved to be much better suited to the taste of the average driver of the Sixties.

The most striking example of the tension between engineering and styling, however, is the biggest car in the Issigonis range, ADO 17, which was launched in 1964 as the Morris/Austin 1800. All the Issigonis cars were based on the same principles of engineering, with the styling influenced by his preoccupation with packaging and maximising interior space. Unfortunately in the case of the 1800 the visual results of this philosophy were not good. Despite some influences from Pininfarina, the 1800 as styled by Alec Issigonis was widely regarded as 'inelegant' compared to the 1100, hence its unflattering nickname 'landcrab'. Customers in this sector of the market were more interested in luxury and show, interior space was not at the top of their list of requirements. So despite its solid engineering, it never had much appeal in the marketplace and sales figures were disappointing.

Proposal from Pininfarina in 1967 for a revised 1800 body shape known as the 'Berlina Aerodynamica'.

Pininfarina, the stylists behind the 1100 as well as BMC's popular range of 'Farina' cars, later came up with some rather more imaginative ideas for ADO 17. By now renderings were becoming more colourful, with crayons and inks supplementing the pencil sketches of Burzi's era. Their proposals show an elegant sculpted shape which put aesthetics ahead of packaging. A full-sized running prototype known as the 'Berlina Aerodynamica' was built and shown at the Turin Motor Show in 1967. There was even a toy car model produced for sale. The drawings for this, along with an 1100 cc and 1000 cc version, were sent to BMC (and are now kept in the BMIHT archive) but went no further. The management were not interested in spending money on revised bodywork in the shadow of the looming British Leyland merger which took place shortly afterwards. Nevertheless the concept was much admired, and is widely believed to have influenced the styling of the Citroën GS.

A 1971 styling drawing by Harris Mann for the 'Diablo' concept, which would develop into the Princess.

During the 1960s, styling methods were changing radically, influenced by the availability of new materials and the introduction of techniques pioneered by North American carmakers. In 1968 BMC recruited a new styling team from Ford, who brought with them a more impressionistic style of sketching along with the practice of full-size clay modelling, methods which are still widely used today. Marker pens using synthetic inks enabled stylists to produce more colourful, vibrant sketches. One of these recruits was Harris Mann, who became Chief of Exterior Styling for British Leyland between 1969 and 1983. By now the unloved 1800 'landcrab' needed replacement, so a project codenamed 'Diablo' (also known as ADO 71) was begun. This featured radical new styling to give the car a fresh, futuristic look. It was launched in 1975 as the 18-22 series though it was renamed Princess within a year. It also quickly acquired a nickname from its shape – the 'wedge'. Its fate, however was almost the opposite to that of the Issigonis 1800. Initially well received for its bold look, poor quality of manufacture would saddle the car with a reputation that fatally damaged sales in the longer term.

The Issigonis 1800, the Berlina Aerodynamica, and the Diablo-Princess together illustrate how the balance between engineering and styling can contribute to the success or otherwise of a car, a story that would be repeated many times during the history of British Leyland and its successors.