Every year a new set of landmarks come round for the many cars produced by the British motor industry over the last century. Some anniversaries tend to overshadow others and although the 60th anniversary of the Mini has been getting most of the attention, it is not alone in celebrating a significant birthday during 2019.

But let's start with the Mini anyway. The date which is usually celebrated is August 1959, but strictly speaking this is not when the Mini was born. The car launched by the British Motor Corporation (BMC) in 1959 was marketed as the 'Morris Mini-Minor' and the 'Austin Seven'. It wasn't until 1962 that the Austin Seven was renamed Austin Mini due to popular usage, but the Morris version continued to carry the Mini-Minor badging for the next decade. So it could be argued that Mini as a brand did not begin until 1969, which is the year that the Morris and Austin badges were dropped and the car was relaunched simply as 'Mini' with its own badge. 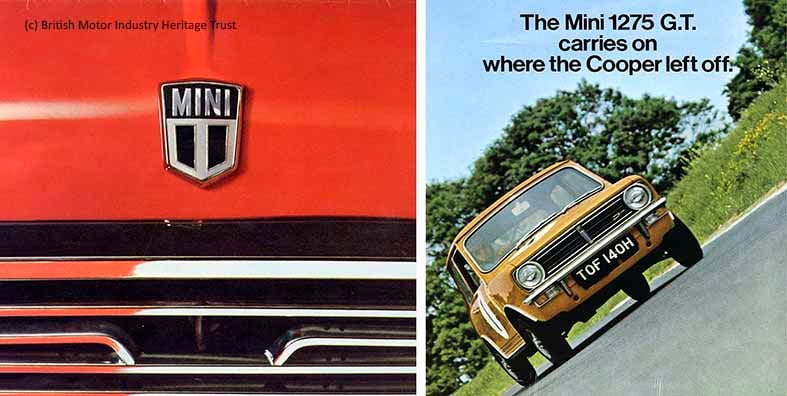 The Mini was relaunched in 1969, renamed the Mini 850/1000 and with its own badge. (Right) Shortly afterwards a new 'Clubman' version was brought out alongside it. The 1275 GT was the high-performance version, and in their 1970 brochure, British Leyland made clear this would be replacing the popular Mini Cooper, which was discontinued in 1971.

That same year another Mini product, with a redesigned front end, was introduced alongside the traditional version. Early in 1968 a new Design team had been recruited from Ford with the brief to rationalise the bloated BMC model range and a few months later the British Leyland merger took place. Though the goal was to design new products, it was necessary to keep the old product range going in the interim, so one of their first projects was a Mini redesign which was codenamed ADO 20. The basic model was called Clubman and even this was up-market of the traditional-style Mini, including wind-up windows for the first time. The high performance version was called the 1275 GT and was intended to replace the Mini Cooper. The new British Leyland Chairman, Donald Stokes, had decided he no longer wanted to honour the 'gentleman's agreement' made between BMC and John Cooper to pay a royalty for the use of the Cooper name, so this was his solution to the problem.

ADO 20 was one of the first projects carried out in the new Design Studio set up at Cowley and staffed by a small team freshly recruited from Ford.

Also celebrating its 50th anniversary is the Austin Maxi. This car had been under development by BMC since 1965 and was intended to complete the Issigonis range of cars. It was to be a mid-range 1500, filling the gap in the market between the 1100 and the 1800, something the company badly needed. Great expectations hung on this car, which had a completely new engine (the E-series) to be produced in a new state-of-the-art factory. It also had advanced features such as a five-speed gearbox and a hatchback.

Codenamed ADO 14, it was originally scheduled for launch in 1967, but from early on BMC realised the car's engineering fell short and its styling was so stark that the sales department complained they couldn’t sell it unless improvements were made. Though it was theoretically an Issigonis design, he had little interest in it because he was focussed on his own project to create a smaller Mini, leaving the rest of his team to grapple with the unsatisfactory ADO 14 prototypes with little help from him. So the launch was delayed while changes were made. 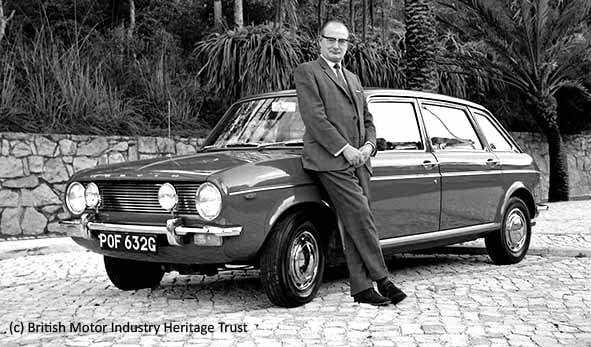 An unhappy looking Harry Webster was sent to Portugal for the launch of the Austin Maxi when this finally took place in 1969. Though he had no hand in its design, he had recently replaced Issigonis as Technical Director, and this duty was therefore considered to be his.

When the new design team arrived, with all their experience of Ford styling and sales methods, they found ADO 14 in the styling studio. Despite the efforts already made to rescue it, their first impressions were not favourable. Following the merger, Donald Stokes and his chief designer Harry Webster came to have a look and found that they could not agree more, with Stokes famously declaring it looked like 'a hen coop'. So the launch was put back another year while the stylists did what they could to tart it up and the engineers tried to fix some of the technical problems.

It was hoped that a bit of glamour might help increase the appeal of the Maxi, so a group of models were also sent to the launch to liven up proceedings.

As Donald Stokes put it, in a special edition of the British Leyland Mirror devoted to the Maxi launch 'Although the experts know that a true British Leyland car cannot emerge until perhaps some three years have passed, this car will still be judged as the first British Leyland car whether we like it or not.' He then added, rather untruthfully, 'I should stress that we do like it.'