It has been another busy month in the Archive department with donations at a record high. This month alone we have received documents from as close as Warwickshire and as far away as Australia! It just goes to show that even during the pandemic (in which a lot of people had time to sort through their possessions) there are still some kind souls thinking about what future generations might be interested in researching.

We usually write a yearly review of our donations in December and this year will be no exception. However, for this months’ Archive News I decided to focus on a very recent donation with a family story.

In August, we received a call from Pamela Moore, who had been referred to us by a member of the Dunlop alumni, asking whether the Museum would be interested in accepting a donation of paperwork amassed by her late father and Dunlopian, Edward Paul Davis. Initially employed as a Technical Assistant in the Tyre Compounds section in 1955, Paul, as he was known to all of his colleagues, progressed within the organisation to develop expertise in the area of high speed and winter car tyre development, becoming Chief Designer in 1996. During the latter part of Paul’s 46-year career he assumed the title of Tyre Legislation Manager, a role which enabled him to use his knowledge to contribute to the codification of national and international tyre standards 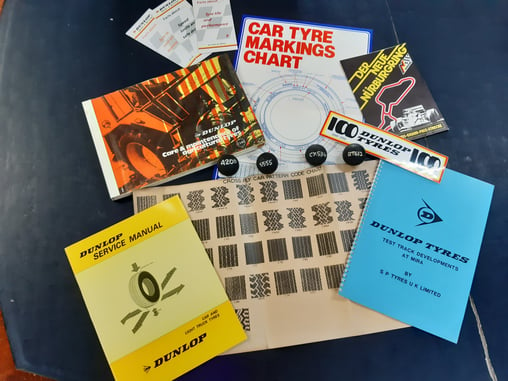 Arriving in a rather intimidating black crate, the material donated by Pamela included service manuals, maintenance guides, tyre charts and testing reports as well as a large range of photographs and even a ‘100 years of Dunlop’ car sticker. There was also a large jar of rubber balls – each of which has a number relating to the type of rubber compound of which it is made.

One of the more unusual pieces from this collection however was a small book – the Dunlop Wörterbuch der Reifentechnik. This is a book of automotive phrases in German, English and French. As the preface states (in all three languages) 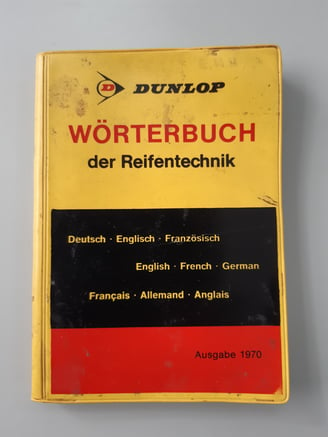 “If they [Dunlop] are to be competitive, they must be highly complicated, as are the technical terms in the tyre industry. Everybody in the tyre field, who wants to be kept informed about international developments, has to read and translate precisely many publications…but very often the translation of technical terms leads to unfortunate misunderstandings…” 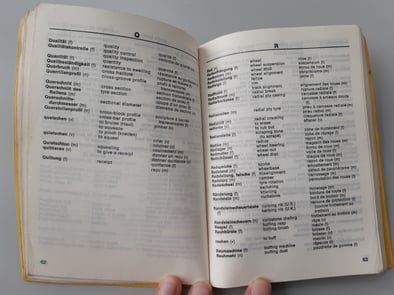 Unfortunately it does not specify what these misunderstandings might have been, but if you want to know the French and German for ‘brake drum’ or ‘grease resistance’, this is the publication for you!