Document of the Month June 2019

Document of the Month June 2019

This month’s document is chosen by Deputy Archivist Charlotte Gallant.

It’s not often that you're searching through a box of material expecting some Maxi paperwork when you find something that stops you completely in your tracks! While
researching for my presentation for the BMC/Leyland day I came across a document for a car I had never seen before. Because it was so unusual I decided to make it my
Document of the Month and research it further. It’s a proposal from March 1978 for a joint venture between Leyland Cars and GKN Sankey Ltd to produce an 'invalid auto'
which would be both cheap and reliable. The proposal explored the needs of disabled drivers, the requirements of the car, mass production including costs, marketing
strategies, lease schemes, sales forecasts and much more. 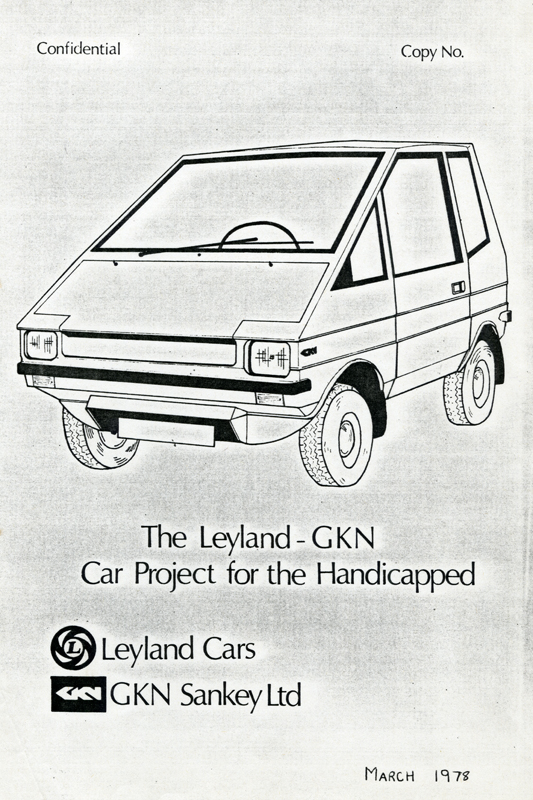 While the title page looks rather innocuous a wealth of information lay within. The proposal has been damaged slightly by its metal binding which has rusted against the
paper. This has now been removed and the document placed in appropriate archival storage materials.

The origins of the business of Joseph Sankey & Sons Ltd are from as far back as 1854 for the production of blank trays from tinplate. The business grew into body panels for automobiles and after the Second World War branched out into a wide range of products including automotive components. By 1961 they were working with Leyland cars producing cabs, as well as road wheels for cars and commercial vehicles. They also made vending machines, plastic mouldings, domestic appliances and parts for tanks. This vehicle was evolved after a detailed study into the problems of mobility for people confined to wheelchairs. The proposal created jointly between the two companies states that GKN would bear the development costs, while the final stage development would be covered equally by both companies. To produce 75 cars a week would cost GKN £180,000 and Leyland £40,000. The retail price was put at £2,396.

The study carried out by GKN Sankey revealed essential requirements for the vehicle – that it must cater for as many categories of disability as possible and that it must be safe, easy to handle and service under all conditions of driving. 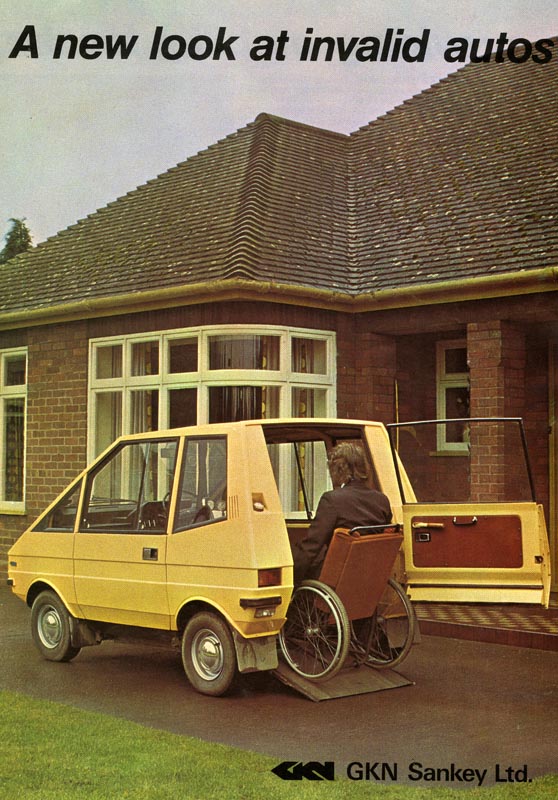 The proposed vehicle was essentially a fibreglass body based on Mini components, not dissimilar, the booklet says, to the Leyland Minissima. With a modern design for the
body it would comprise two doors – one at the rear of the vehicle for use by a wheelchair bound driver or passenger, the other on the left-hand side to be used by ambulant
drivers or as an emergency exit. Driver visibility and headroom were specifically prioritised. The car would have been painted using colours found on the Mini range – mid
blue, sandglow, russet brown and inca yellow.

The possibility of export marketing was also researched. The two countries that showed the most interest were Holland (considered the most promising) and Australia. It was proposed to sell vehicles to the Dutch Medical Service and Transport Ministry who would purchase vehicles for evaluation.

The proposal also discussed the downsides to the project –these included that the vehicle was expensive to produce, much more costly than a Mini. This, combined with
the limited incomes of the severely disabled and the low level of the motability allowance (£5 a week at the time), made a very difficult marketing platform to sell the vehicle on.
The sales forecast was low, and without guaranteed Government support in waiving car tax and VAT, it is doubtful that their target audience could have afforded the vehicle.

There were other motability cars which were successfully mass-produced. The ice-blue Invacar, for example, which used Mini wheels, was produced in its thousands and
distributed by the government through the motability scheme. They stayed in service right up until 2003 when they were finally recalled and scrapped due to safety concerns,
hardly surprising considering the age of the original design.