My name is Charlotte Gallant and part of my role is organising the donations that come into the Archive on a monthly basis. While the majority of our collections came from British Leyland themselves, we are hugely reliant on the generosity of the public who donate items to us for permanent preservation.

It has been a bumper year of donations for the archive team, from reuniting our Business collections earlier in the year thanks to the help and support of The Modern Records Centre at Warwick University (to read more visit our August blog) to travelling as far afield as Exmouth and Leeds in a huge van to collect large boxes of paperwork. So to review 2019 - one of our busiest years, we decided to take a look at some of the interesting items that have joined our collection.

In March we were gifted this small but informative booklet.  It includes a full list of all the contests the band attended from 1929-1930, the names of the trophies held and where they were won and finally the total value of the prizes –the 8 trophies and 35 medals (won at all contests) totaling £300.

The booklet also includes a photograph of the band with their President William Morris (Lord Nuffield) and
the band master Sydney Wood – a role he would undertake until the outbreak of the Second World War.

We were very fortunate to be donated these drawings, designs and samples from the artist himself. These included artwork for Land Rover, Mini – including the Mary Quant special edition, Metro and Rover to name but a few. There are also physical examples of some of the designs, mostly the Rover ‘Viking’ badge. The donation also included documents connected with the Laura Croft Tomb Raider film, for which Land Rover provided a series of designs and of course, the vehicles (one of which can be seen in our museum) 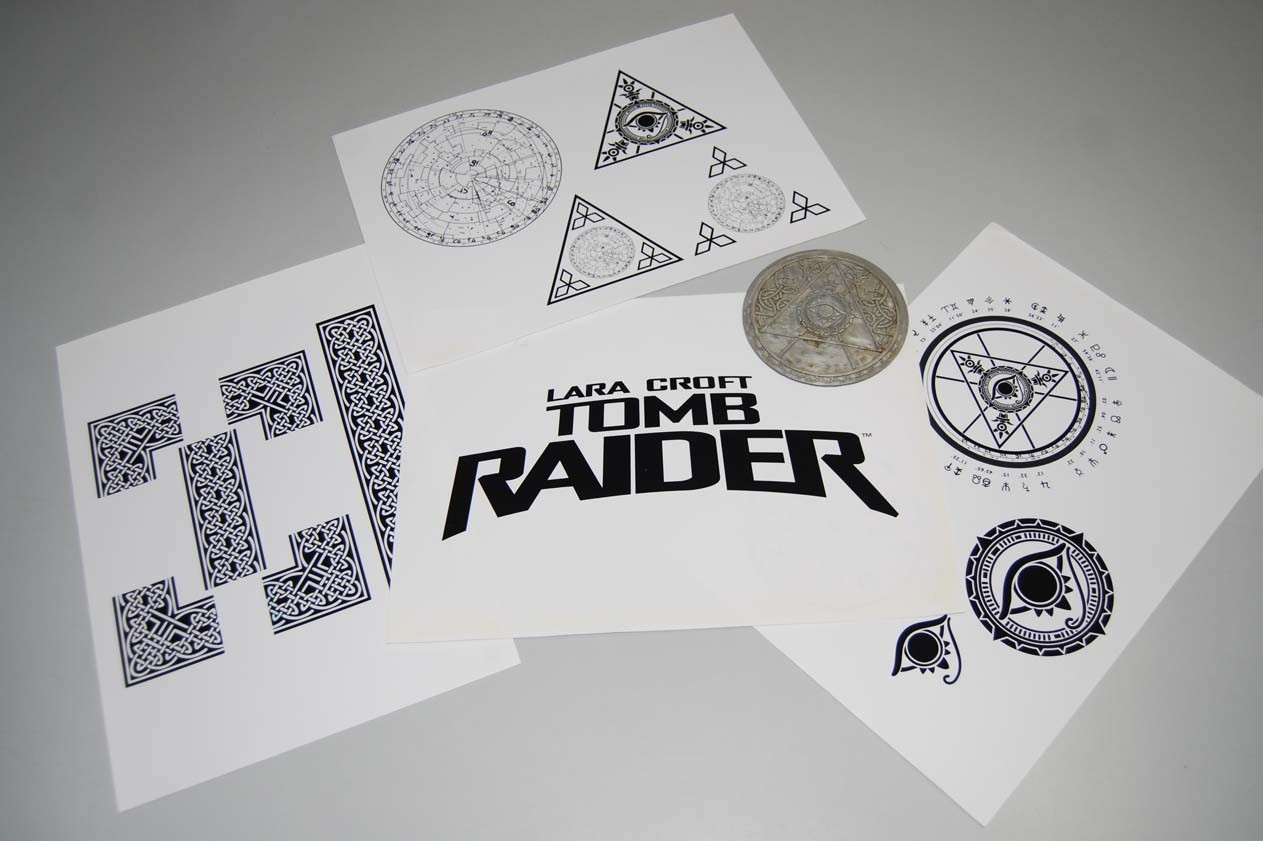 This is a wonderful, handmade piece of history which documents the life of a 1904 2 seater Wolseley (P-1860). The scrapbook which includes photographs, programmes, tickets and other documents was gifted to us by Peter Murcott, who can be seen driving in some of the images. His father, J.V. Murcott, the former owner of the car drove it during many events such as the London to Brighton Veteran Run and the Hull to Scarborough Veteran Car Club Rally. The car was eventually purchased by the British Motor Museum and is now on display for the public to enjoy. The scrapbook is a great piece of social as well as automotive history and helps us to tell the story of one of the oldest cars in the museum. 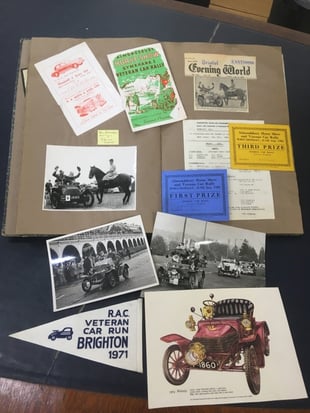 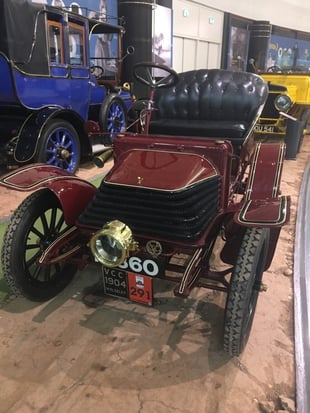 We were approached earlier in the year by enthusiast, Mr Dante, to see if we would be interested in accepting his life’s collection of automobilia documents. The majority of these were sales brochures but also included a wide range of marketing of various models from local dealers. I will be writing a more extensive blog about this particular expedition for next year, however in the interim, here is a photograph of a very small sample of sales brochures from what has now been designated the ‘Dante Collection’. 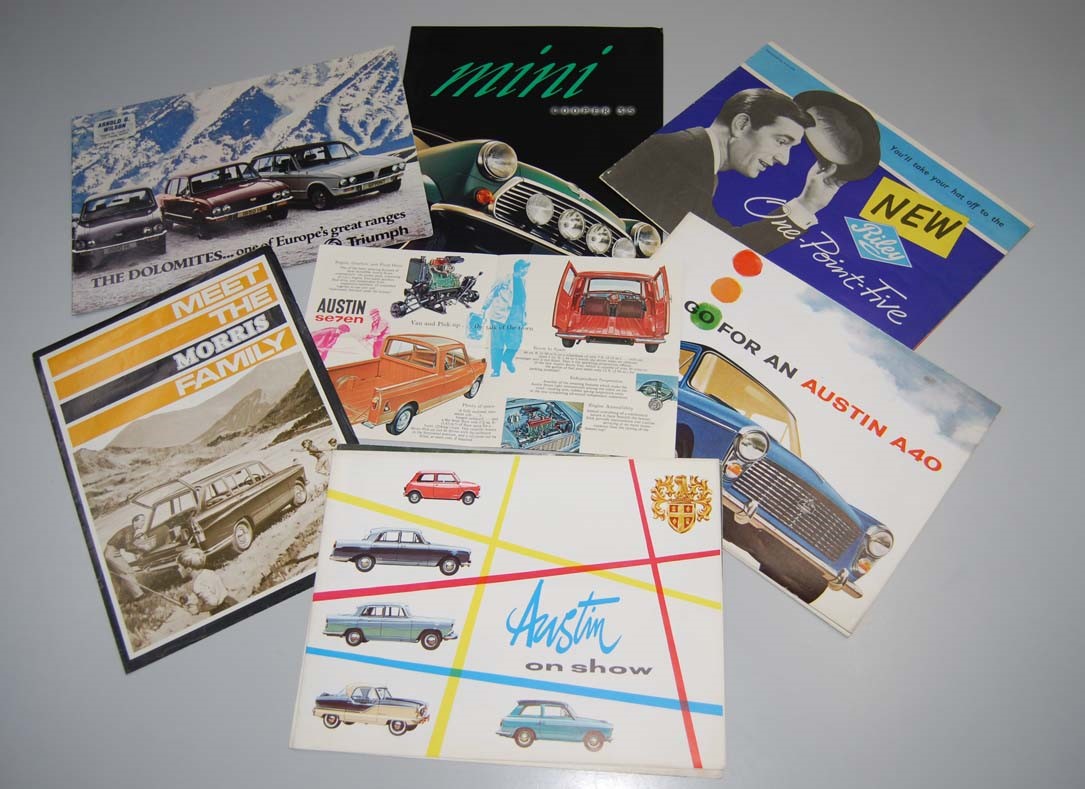 One of our most recent donations tells an extraordinary journey against distance and climate. In 1937 Lt. Col Dobson drove his Morris 8/40 from Gold Coast (now part of Ghana) to Plymouth travelling across Africa to Khartoum, following the Nile to Cairo, across the Mediterranean to Athens, then through Europe to Britain. The route covered approximately 8600 miles of tough terrain and harsh conditions taking 8 weeks and 3 days in total. The route was plotted on the large map pictured below and the story captured through a handwritten journal and many photographs.

Some of the amazing photographs of the journey have been painstakingly colourised to further convey the desolate landscapes faced by Lt. Col Dobson 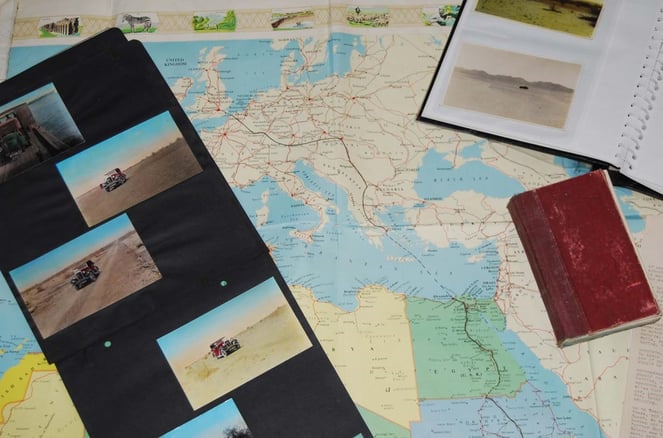 Some of the amazing photographs of the journey have been painstakingly colourised to
further convey the desolate landscapes faced by Lt. Col Dobson

We have had many more donations this year which we simply didn’t have time to write about; however we are immensely thankful for each one. As much as automobiles are a massive component of the museum, our key interest is in the social history surrounding them. It is only through these kind contributions that we have built up a varied and representative collection of the motoring industry and those affected by it.

As you may have noticed we have recently been remiss in our publication of our two monthly blogs ‘Document of the Month’ and ‘Archive News’. Unfortunately this is because of the recent loss of two key members of staff: Archive Assistant, Mollie Horne, who was the driving force of our outreach and social media and the Archivist, Gillian Bardsley, without whom after 30 years of hard work the BMIHT Archive would not be the success it is today.

Because of this the Archive will be reducing its output to one blog a month. However, with a calendar of exciting anniversaries and events already lined up for 2020, there will be lots more Archive material to view both in the museum and online in the future.