As the museum reopens and things get back to 'normal', things are progressing as always in the archive. In recent months, a small series of ‘lantern slides’ which form part of our Wolseley Photographic Collection, has been undergoing further cataloguing. These are images stored on small glass panes and used in ‘magic lanterns’ (an early form of projector) hence their name.

Magic lanterns have a long history, as the basic requirements were simply a light source and a lens for projection, and they were used for public lectures and entertainment in an age before the cinema or television had been invented. But as camera technology developed, and electricity was harnessed as a power source, the equipment became more sophisticated. By the late 19th Century the Epidiascope was widely available. Such a piece of equipment which would have been used to view our slides, and this is probably why there is also a splendid example of an Epidiascope in our Collections. 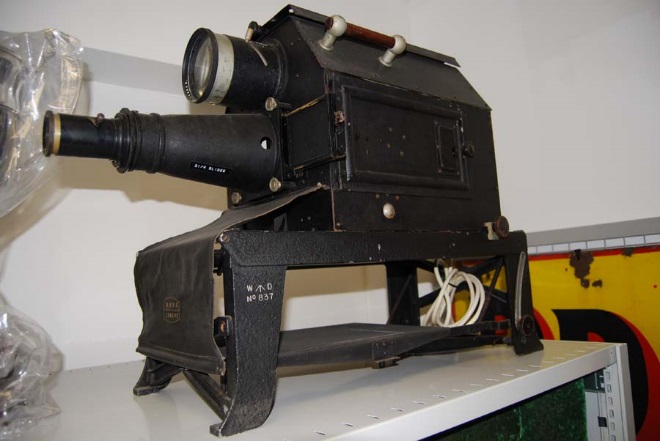 The lantern slides in our Collection date from the beginning of the 20th century, and they comprise several sets of images clearly put together for talks on specific topics. One of the more unusual sets consists of sketches and caricatures, copied from drawings made some 50 years earlier, and depicting various steam-powered contraptions. This was puzzling because Wolseley never made steam-powered cars. One theory is that they were prepared for a lecture on potential power sources as in 1893 Herbert Austin (Managing Director of Wolseley at the time) developed a two-cylinder stationary steam engine to operate sheep shearing equipment. 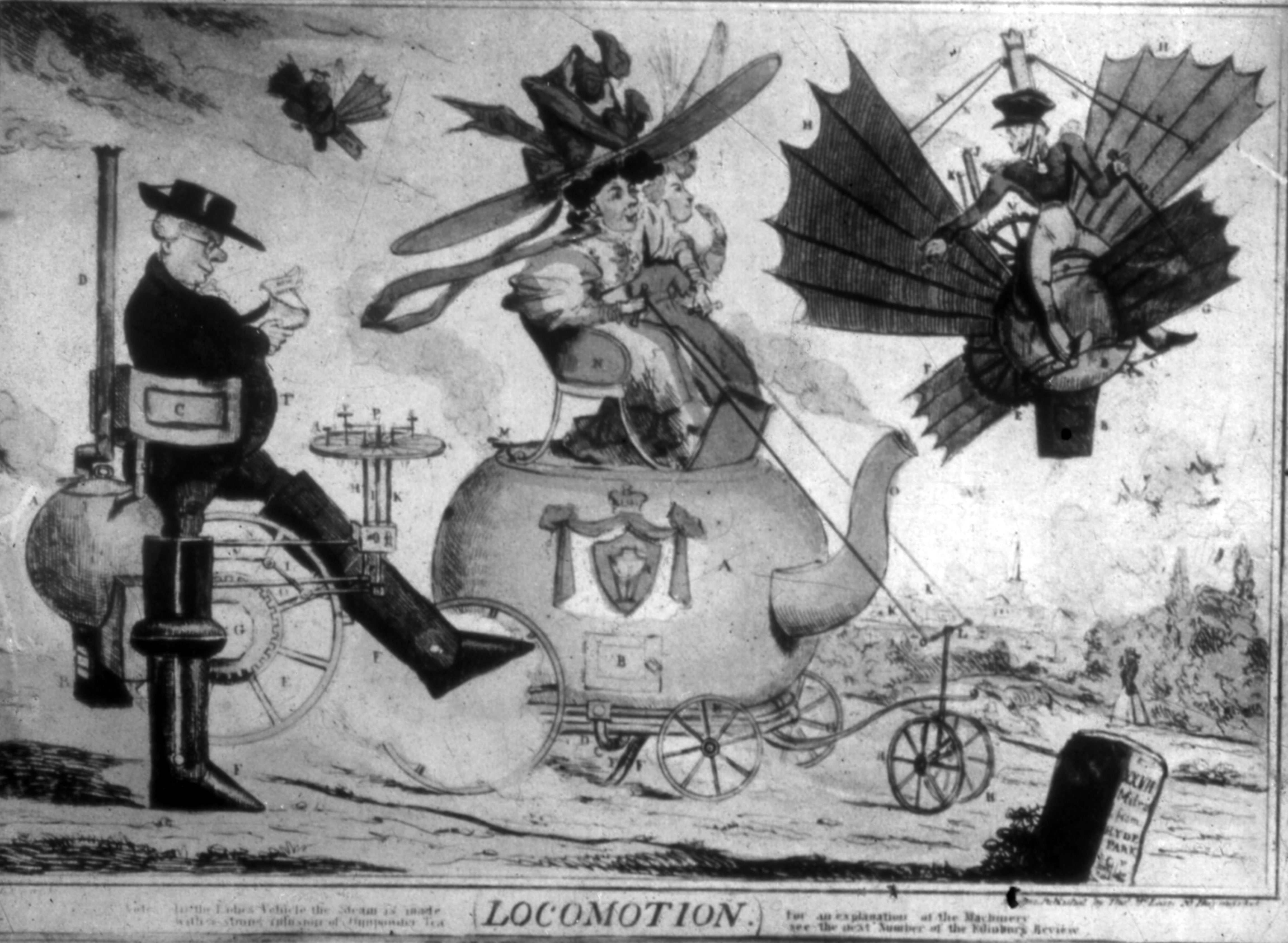 Many of these were not drawings of actual vehicles; some were speculations as to what the future might hold, others a satirical comment on the society of the time. This brilliant cartoon by Robert Seymour includes steam powered legs (or possibly inspiration for Wallace and Gromit’s Wrong Trousers!), flying machines, and even a carriage in the shape of a teapot – the steam being made with a ‘strong infusion of gunpowder tea’.

The challenges of moving vehicles with steam were considerable and obvious stumbling blocks were the size and weight of machinery required to produce the necessary output, not to mention the dangers of its various elements, namely burning coal, boiling water, the explosive nature of the combustion process and the steam itself! Gradually, though, the technology was refined and made more manageable, to power boats, ships and, of course, the railways. A viable road vehicle remained elusive and some of the drawings speculate on what the future of ‘locomotion’ might look like. Steam power, they suggest, is not one of the most attractive propositions.

Persistent inventors continued to dream of steam vehicles that might take to the roads, and among the slides is an example is by Scottish inventor David Gordon which formed part of his patent for a ‘steam carriage’ in 1824. 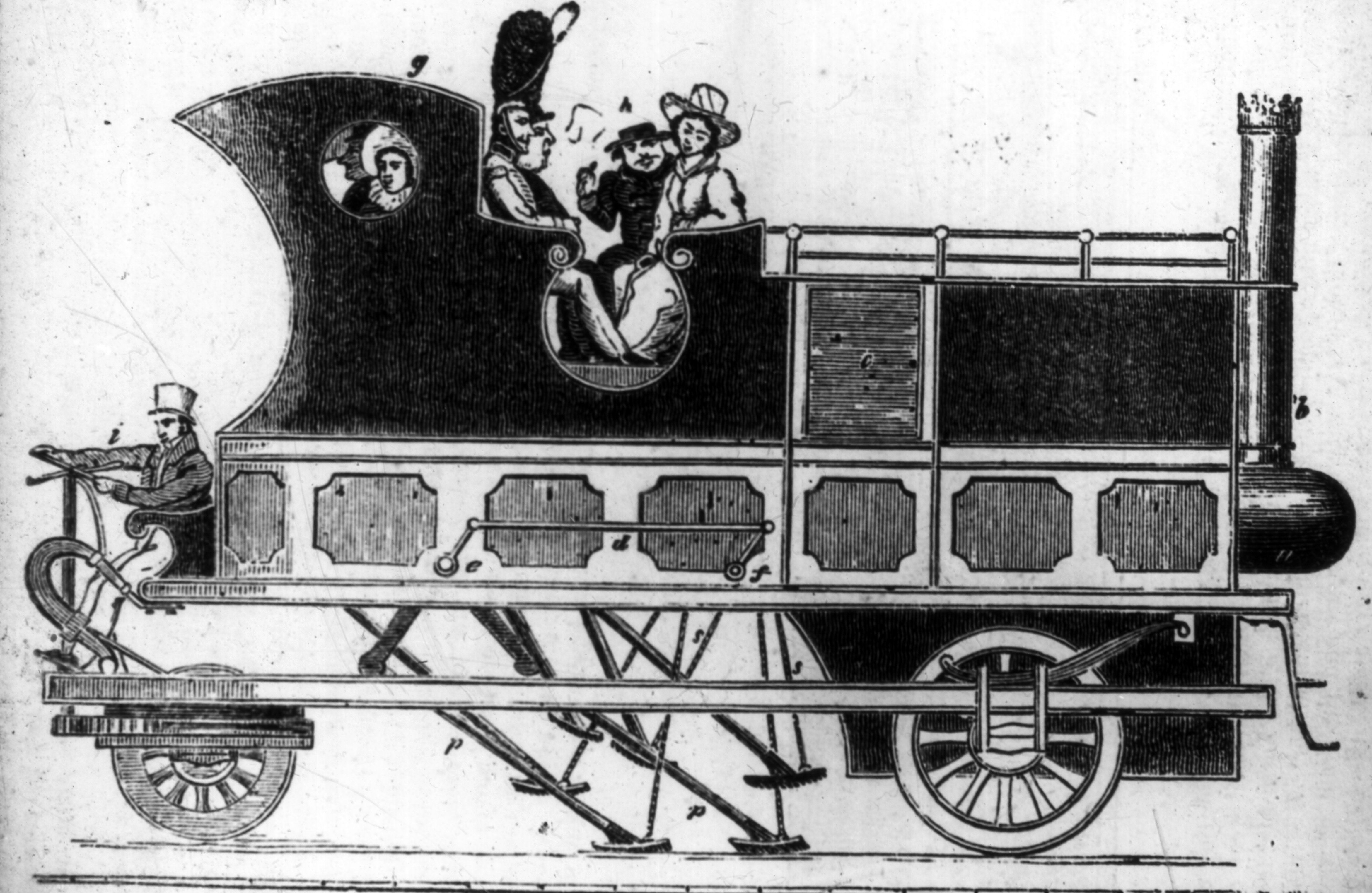 These legs were successively forced outwards by one crank against the ground and then immediately lifted by the revolution of another, pushing the vehicle along. The carriage also had three wheels although these were not powered, each with a separate axle; one in front to steer and two at the back. The Driver is sat on his own at the front of the carriage, the passengers behind him with a steam funnel at the back of the carriage.

The idea itself was not new, in fact the first half of the 19th Century saw two or more patents every single year for various designs connected with or improving steam transportation. Where David Gordon’s design differed from others is the use of six joined iron ‘legs’ to move the carriage along the road, to simulate horse-hooves. Gordon believed that the iron legs were absolutely necessary in order to solve the problem of driving a steam powered vehicle up a hill without the wheels slipping. It was not a success. The carriage was just too heavy, slow and inefficient.

One of his rivals, Goldsworthy Gurney the ‘gentleman scientist’ was slightly more successful in actually getting a working vehicle onto the road. In July 1829 a Gurney steam carriage undertook a journey from London to Bath and back, at an average speed for the return journey of 14 miles per hour—including time spend in refueling and taking on water. The main danger seemed to be from locals along the way, who decided to throw stones at it, injuring the driver, as a result of which an escort was sent out from Bath to guide the vehicle safely into the town without further incident. 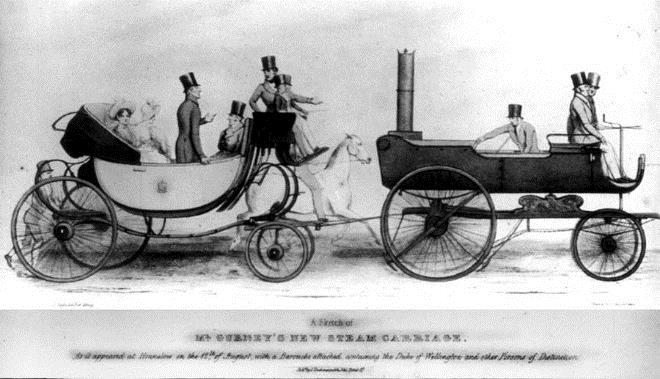 This contraption does not look very practical, and the passengers in the barouche would have been in danger of enduring nostrils full of smoke if the wind blew in the wrong direction. One can only speculate that the horse running alongside, perhaps as a backup in case of emergencies, must have felt infinitely superior to the ungainly steam carriage that was meant to replace him. The venture was not commercially viable, not least because of vested interests who did not want to see any competition to their horse coach businesses. This was a problem early motor cars would also face.

It was enjoyable to work with lantern slides which are a little out of the ordinary compared to the more usual negatives and prints. Because of their original purpose, they offer a different perspective on the history of road transport. They also give some insight into the use of photography as a means of entertainment and education rather than simply to record events.