One collection which hasn’t had much coverage of late in our monthly archive blogs is that of Pressed Steel Fisher. The Pressed Steel Company was founded in 1926 at Cowley near Oxford, in order to modernise the manufacture of car bodies. The old and time-consuming coachbuilding techniques using wooden frames covered by metal panels was quickly overtaken by the introduction of the ‘pressed steel’ body. Fisher & Ludlow had similar a background to Pressed Steel – formed as a public company in 1920 (although they had been trading since 1849, even making mess tins for soldiers in the Boer War) they made a number of steel body pressings for automobiles among other items. Through different routes, both companies eventually found themselves as subsidiaries of the British Leyland Motor Corporation, and in 1968 the two companies were combined as Pressed Steel Fisher.

It is because of these conglomerations that we hold the historical records for Pressed Steel, Fisher & Ludlow and Pressed Steel Fisher, and investigation of their records shows that both of these companies had a very interesting role to play during World War Two.

Pressed Steel manufactured many parts for bombs, tanks and aircraft at its Cowley factory, including the Havilland Tiger Moth. We also discovered a number of plans for another form of wartime transportation. In particular, we came across a large scale drawing whose description simply stated ‘Float Sweep Assembly, Mark IV 1943’. After some research it was found that this was a code name (given for security purposes) for a Welman midget submarine.

A midget submarine is typically under 150 tons and operated by a crew of one or two. The majority were developed during the Second World War by the Royal Navy. The Welman was designed by Colonel J Dolphin of the Royal Engineers in mid-1942 and after initial testing and development the designs were sent to Morris Motors for construction. Exact numbers are unknown but it is estimated that about 100 of these Welman submarines were made by Morris Motors who contracted Pressed Steel to make the panels.

The purpose of midget submarines was to place explosive charges on or adjacent to enemy vessels at anchor as part of harbor attacks. The Welman submarines had a single crewman and were only used once in combat. In November 1943, four of them were sent on a raid of German ships which were anchored at a dry dock in Bergen, Norway. Unfortunately the mission was aborted soon after it began. A contributory factor may have been a serious design flaw of the submarine which did not have a periscope, but relied on seeing through armoured glass segments in the small 'conning tower'.

As some of these drawings are dated 1944, it can be assumed that there was some effort to re-design the Welman submarine, but the only thing that can be certain about is that the design was deemed unsuccessful and was discarded in favour of the more effective X-Class midget submarine.

While Pressed Steel specialised in the vehicles, it seems that Fisher and Ludlow made the ammunition from a shadow factory in Castle Bromwich near Birmingham. Below is a picture from the Fisher and Ludlow collection of a type of bomb ordered by the Royal Airforce. This is not the type of ammunition the Welman submarines would have used, however it would have been a similar size and weight. While the bombs were not filled with TNT in the Fisher and Ludlow factory, based in Birmingham, the parts and casings were certainly made by them, along with several other companies in the Midlands area. The drawings specifically refer to the empty weight of the bombs. 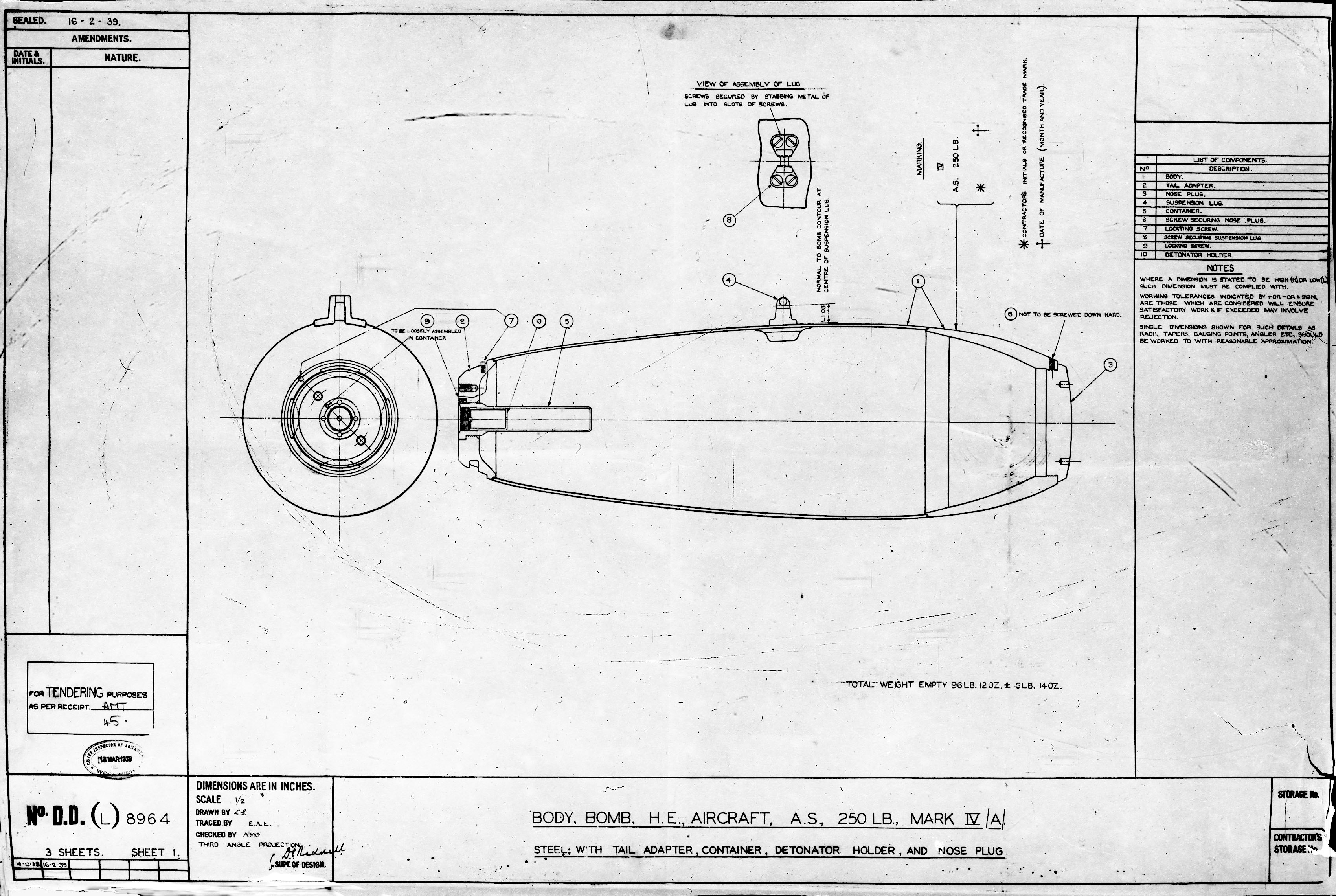 This is a basic drawing of a 250lb aircraft bomb assembly, ordered by the Royal Airforce. The negative is dated March 1939, however this type of bomb was already in use by this date. The following year about 80,689 of these bombs were used in conflict.

Fisher and Ludlow also made a huge range of parts and pieces for all manner of machinery. There were the usual bits for tanks, aircraft, boats and again submarines. But also items for soldiers and civilians such as soup canisters, helmets, parts for air raid shelters and even advice on how to fold a parachute correctly.

Our photographic collections show not just the large number of products made by the motor industry, but also the wide range of companies that were involved - Morris, Leyland, Austin, Wolseley, parts companies such as Borg and Beck and even small steel working companies in Gloucester, Bristol, Guildford and Kingston on Thames. These negatives show how every factory, small and large, was put to use during the war.