My First Car: Another not just at 17!

Not everybody gets a first car at 17. In this edition, Syb falls in love with her first car, aged 30!

This month’s story is another ‘Not just at 17’ and highlights that not everyone gets their own first car at 17 and that it’s never too late to find a love for cars.

This story reflects on memories of a Singer Chamois, a luxury version of the Hillman Imp which launched in 1964. The Hillman Imp was an alternative to BMC’s Mini. Although Hillman was part of the Coventry based Rootes group, the Imp was built in a brand new purpose-built factory in Glasgow relying heavily on the support of the Coventry climax specialist engineers - particularly on the finished engine. Production was constantly troubled with numerous issues, resulting in the Imp never really taking off, and production halting in 1976 after only 500,000 cars being made. The Singer Chamois differs from the Hillman Imp due to its twin-carburettor engine, which is more powerful than the Imps 875 cc four-cylinder engine. 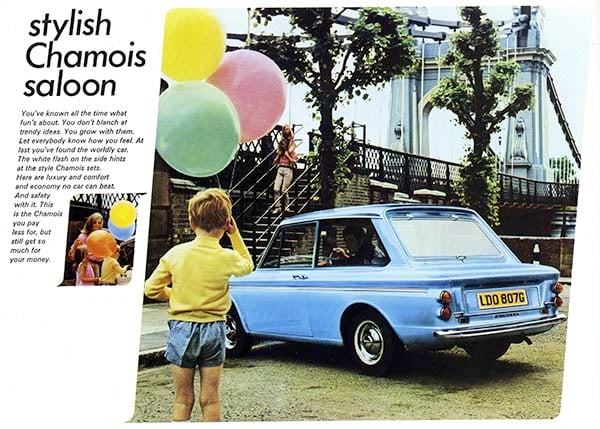 Syb, aged 30, and her Singer Chamois in sporty maroon

I got my first car in 1970 aged 30. Although I had driven other cars before, this was all mine. Nobody else's. It was a Singer Chamois – a sporty maroon hatchback. A proper ‘brum brum’ kind of car. Absolutely fantastic! A super car to drive, but I suppose awfully old-fashioned now.

Oh, we used to buzz everywhere in that car: from Birmingham to Wales and Scotland and all over. My friend Margaret’s husband had a Hillman Imp at the same time and he used to follow us on the drives to where we were staying on holiday. I remember on one trip, Margaret, the kids and I set off for Wales first and our husbands were to follow in their cars. I suppose they must have been working. Just outside of Corris, without warning, my son Ian suddenly threw up all over my lovely car! It was as if he had done it on purpose! It’s funny the things you remember, isn't it?

Eventually though, the children got bigger and my Singer had to go. My husband, who was a doctor, always had the smaller cars for work and I always had the bigger cars so that I could carry the children. This is when I moved onto the real love of my life… my Citroen DS!