Document of the Month August 2019

Document of the Month August 2019

This month's document has been chosen by Archive Assistant, Sarah-Jane Wilson.

The document that I have chosen this month is a brochure for the Little Chef Lodge from 1987. The pamphlet includes information about the facilities on offer at the lodge and a helpful map showing the different locations around the country.

The Little Chef brand had a long history with the travel and transport industry in the UK. The first Little Chef restaurant was opened in Reading in 1958 by caravan pioneer, Sam Alper who was famous for making the holiday tradition of caravanning popular after the Second World War. His most famous caravan, the light and cheap 'Sprite', sold more than five hundred units in its first year of production.  As his business grew, he travelled around the world to promote the Sprite and in the mid-1950s he visited the United States where he saw the roadside diners that would become the model for his Little Chef restaurants.

Alper hoped to create a British version of the classic American café that families could stop at for an affordable bite to eat and his idea was a hit. By 1965 there were twelve red and white restaurants open nationwide and a further thirteen by 1968. The 1970s saw the restaurant count reach 174 and in 1977 the famous cherry filled 'Jubilee Pancakes' were introduced to celebrate the Queen’s Silver Jubilee. Other delicious offerings on the menu in the 1970s included minced beef steaks with tomatoes and French fried potatoes for 6/0d or fruit cocktail with ice-cream for 3/0d. 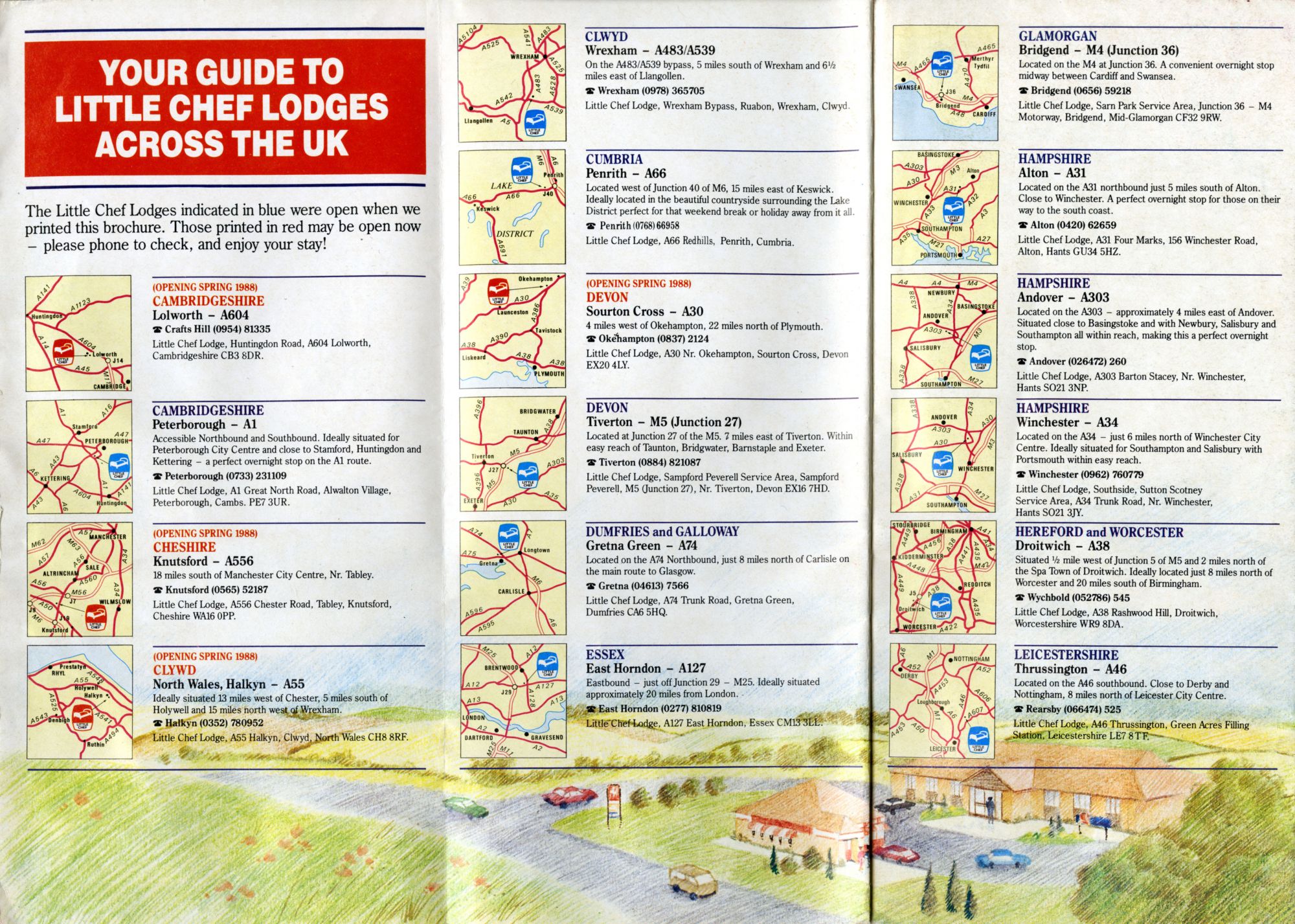 With the restaurant's surge in popularity, the first Little Chef Lodge was opened in Gretna Green in 1976. Aimed at people travelling for business and families heading for holiday destinations, the lodges boasted high standards of service and a warm welcome at a competitive price. This brochure from 1987 with the tag-line, 'A name you can trust', offers spacious rooms with high-quality, colour-coordinated carpets, curtains and décor, a colour TV with built in radio alarm clock and a luxurious feather-filled duvet. The lodge is advertised with a Little Chef restaurant just next door with 'good food in clean, comfortable surroundings'. With the reasonable price of £19.50 for a single occupancy or £24.50 for a family, how could anyone refuse an overnight stay? There is also a section of 'Useful Information' for those using the map, including planning your journey in advance to help the driver stay alert and tuning in to BBC bulletins about road conditions to avoid hold-ups.

By the 1990s the Little Chef brand had passed its peak having been bought out by several other companies. With the growth of the motorway network taking business away from A-roads and the competition from cheap fast food restaurants, the Little Chef chain began to decline. Even an attempted modernisation by famous chef Heston Blumenthal in 2007, who updated the menu with affordable versions of ox cheeks in red wine sauce with mushrooms, was sadly not enough to save the chain. The Little Chef Lodges were gradually re-branded as Travelodge hotels and the Little Chef restaurants were driven out by motorway services, almost completely disappearing by the early 2010s.